Our outstanding performers and sponsors are highlighted in this Vernon Morning Star Insert.

click on the image to view in a new tab

This short 3 minute time lapse video shows some of the preparation and set-up that takes place in the days leading up to the big weekend.

The actual run time of the video was about 12 hours. This is a technique called “interval recording” capturing only 2 frames per second. Tricia Cooney, our communications and social media coordinator set up her camera on a wide angle for the day, while shooting close-ups with a second camera owned by Randy Jones, our sound technician.

Besides the lighting, sound, and stage set-up, we have many other behind the scenes volunteers and committee members working energetically on organizing accommodation, feeding and hydrating our crew and performers, parking, and a myriad of other tasks.

Our committee and volunteers have worked hard over the past months and the excitement builds with only a few days left to the big weekend event!

Our volunteers and crew of over 30 people begin assembling the set tomorrow and transforming Kal Tire Place for the 4th Annual Okanagan Military Tattoo.

The Calgary Round-Up Band has already arrived and started rehearsals today while our local dancers, Dance2Fit, Sadok Ukrainian Dance Ensemble and the Argyll School of Performing Arts and Motion are in their final days of rehearsing their special Mosaic dance to celebrate Canada’s 150th birthday.

WE’LL SEE YOU AT THE TATTOO!

As Honorary Patron of the Okanagan Military Tattoo, I am pleased to welcome guests and performers to the fourth year of this musical extravaganza.

2017 is a year of many commemorations: the 150th anniversary of Confederation in Canada, the 125th birthday of host city Vernon, and, most poignantly, the 100th anniversary of the Battle for Vimy Ridge. With 600 performers on display, this year’s tattoo promises to be a reflective and celebratory exhibition of the proud history and service of our Canadian Forces. With exhilarating performances by pipers, drummers, musicians, military bands, marching troops, dancers and singers, this programme is an inspirational tribute to a hundreds-year old practice, kept alive with great vibrancy by our armed forces, army cadets and cherished veterans.

I offer my sincere thanks to the organizers, volunteers and performers, whose dedication to military music and tradition have made this tattoo such a success.

On behalf of Her Majesty The Queen and all the people of British Columbia, I wish you a most entertaining and memorable performance.

Don’t miss out on an opportunity to win your tickets this year to the Okanagan Military Tattoo!
Castanet.net is once again running it’s contest to win tickets to this spectacular event.
But don’t miss out. Contest closes July 16, 2017 / 12:am 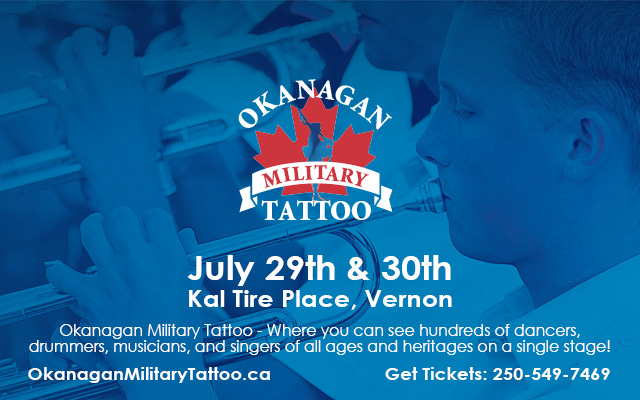 Check out this great video by the Naden Band of the Royal Canadian Navy and get a sneak peak at what’s in store for you this year at the Okanagan Military Tattoo. You’ll be amazed at how much is happening this year, including performances by Sadoc Ukranian dancers, the Celtic Lasses, multiple pipe bands, the RCMP Ceremonial Troop, and much, much more!

Remember to get your tickets early. Follow the “Purchase Tickets” button at the top of this page for ease of online purchase and get ready for a FULL afternoon or evening of entertainment.

Each year it takes many performers, volunteers, community members, and sponsors to pull together such a colossal performance as the annual Okanagan Military Tattoo.
Recently, we were pleased to have Mayor Akbal Mund show his support by attending one of our weekly committee meetings and adding a few words of wisdom.

This past Monday, the Okanagan Military Tattoo Committee was pleased to honour Major Judy Peter who for three years was the Commanding Officer of the Vernon Cadet Training Centre.

Under her leadership, the participation of the cadets grew each year until in 2016, there were over 120 cadets taking part in the Tribute to the Veterans and playing with the Artillery bands led by Captain Jim Tempest.

Full credit goes to Maj. Peter! As she moves on, we will miss her and the many ways she has contributed to the OMT and to the greater community.
Also at the coffee party was Captain Keri Winkelaar (taking over for Maj. Peter). Welcome Keri! We look forward to collaborating with you in the run up to OMT 2017.